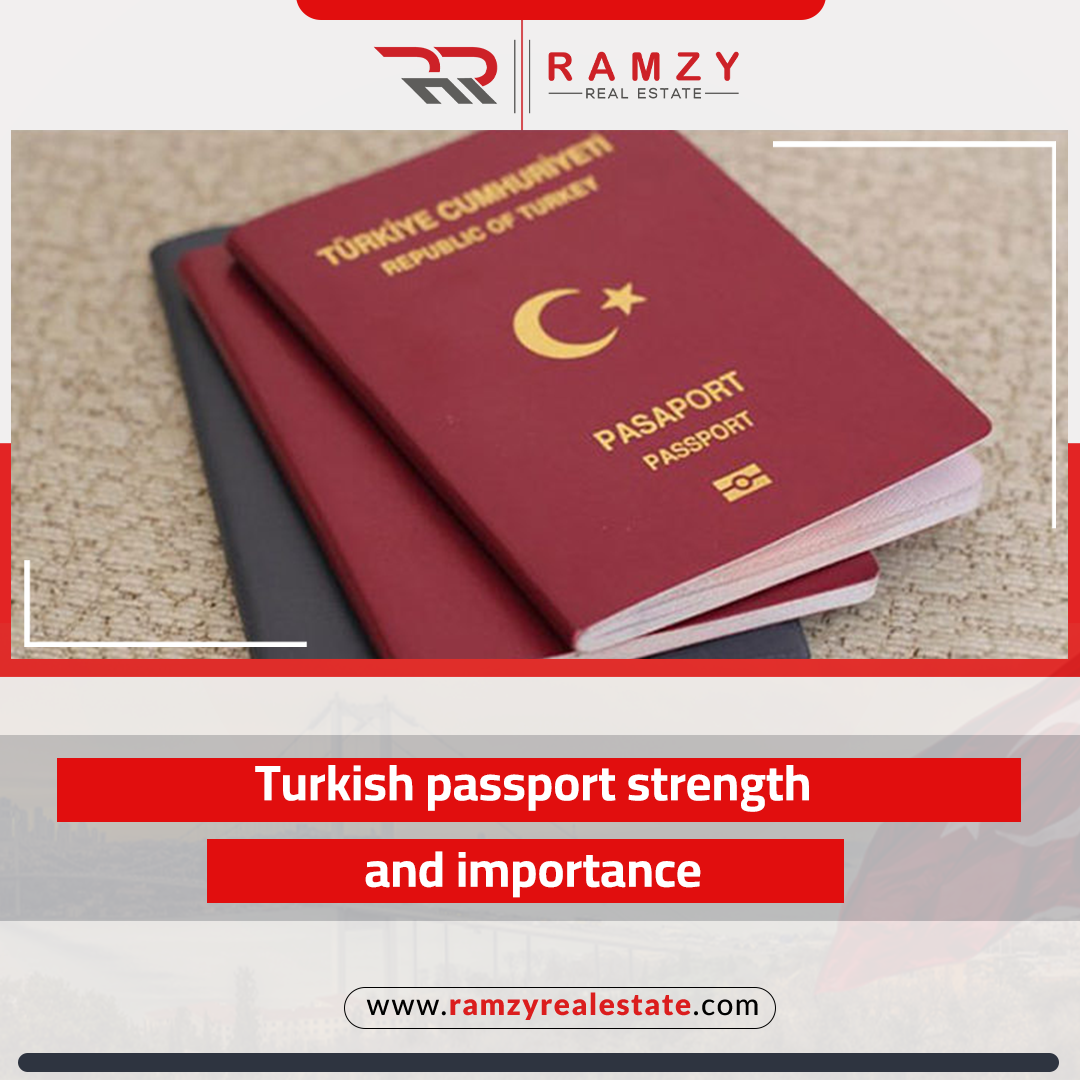 The editing team at Ramzy Real Estate will highlight to you today one of the most important topics for any investor or foreigner, which is the Turkish passport, and its strength - its features - ways to obtain it - and many other details that interest you about it will be indicated.
We wish you an enjoyable and useful reading.
Before we begin, we must point out a very important matter, which is that the conversations about the Turkish passport are many and varied, but despite that, the questions that are raised about it are many and varied, and this is what prompted us to organize this report around it, so we advise you to follow up well.

See the strength of the Turkish passport:

The Turkish passport has begun to prove to be of an important position for a long time. This is not something new, but what has been observed according to the statistics issued periodically and constantly is that over time it records superiority and progress, surpassing many important passports at the global level.
According to the platform specialized in classifying passports in the world, the Turkish passport during the current year 2022 AD ranked 37th and certainly it will not stop at this point, as it is expected to record more progress in the coming periods with this great prosperity that Turkey is witnessing in its economic and political sector and comprehensive renaissance in its infrastructure.

How do you get a Turkish passport?

In fact, when we are talking about the methods that must be followed to obtain a Turkish passport, we are not referring to one or limited methods, but to many different methods, and this is among the many facilities provided by the Turkish government to foreigners in this matter.
Through the following paragraphs, you have the opportunity to see fully the ways to obtain this passport:
First, it can be obtained through real estate investment, under specific conditions, which is that the price of the property is not less than 400,000 US dollars, in addition to the need to pledge not to sell the property before the lapse of three years.
The Turkish passport can be obtained through commercial investment worth at least 500 thousand US dollars for a period of three years, or by purchasing bonds or shares of the same amount while keeping them for the same period.
It can also be applied for through a bank deposit, but within the commitment provided that no part of it is withdrawn before the lapse of at least three years.
One of the famous ways to obtain it is to marry a Turkish citizen, but citizenship is not granted to a foreigner until after at least three years have passed in order to be sure that the primary purpose of marriage is to establish a family and not only obtain citizenship, and also to ensure that it does not constitute No threat to public security in the country.

The most important advantages of the Turkish passport:

It cannot be neglected to mention the set of privileges that can be obtained when you choose this passport specifically, and not other passports around the world, and through the following paragraph we will highlight the most prominent of them:
-It can be obtained within a short period of no more than 30 days.
-It can be applied directly after obtaining Turkish citizenship.
-Benefit from medical and educational services.
-Obtaining all rights of Turkish citizens.
-Possibility to participate in political life.
-Valid for ten years.
-It can be easily renewed.
-It is given to all family members.

Certainly, the advantages mentioned above are not all about the reasons that motivate the foreigner to apply for a Turkish passport. There are many other motives, which we will briefly refer to through the following points:
-The developed and booming Turkish economy.
-stable political situation.
-The impossibility of going to any Arab country due to the harsh conditions in the Middle East.
The distinguished geographical location of the Turkish state between three important continents.
-Its supervision over four seas and the presence of the Bosphorus Strait that separates its two sides.
-The existence of all legislations that confirm the feasibility of real estate investment in it.
-It is easy to buy and own real estate in Turkey and without security approval.
-It is one of the most important industrialized countries in the world, as it ranks 13th in the world.
In the coming years, its economy is expected to become among the first in the world.
-A suitable environment for permanent residence and stability.
-The cost of living in Turkey is low compared to the costs in Europe.
-Real estate prices in Turkey are reasonable and cheap if we compare them with prices in American, Arab or European countries.

Among the information that it is important to know about the Turkish passport, with it, you will be able to travel to more than 61 countries without the condition of obtaining a visa to enter and also an automatic visa can be obtained upon arrival to more than 45 countries around the world, and there are 8 countries that grant the holder an electronic visa.

In general, we can tell you that the foreign investor is the most preferred to obtain a Turkish passport, as it helps him in his success in his investment project to reach the highest results and privileges and to ease movement between countries of the world without incurring a lot of fatigue, money and wasting time.

The importance of obtaining a Turkish passport:

The advantages and importance of obtaining a Turkish passport are not limited to what has been mentioned only. There are many other reasons that encourage foreigners to apply for this passport, through the following paragraph we will mention the most important of them:
-Turkey's strategic location in the middle of the world and near the Arab world.
-The state of political stability in the Turkish state.
-The facilities provided by the Turkish government for those wishing to obtain it.
-Turkey ranked 13th among the most powerful industrialized countries around the world.
-A means of transit and entry to many countries of the world within easy procedures.
What you do not know is that the Turkish passport is one of the most powerful passports in the world, and this has emerged clearly in recent years, where it was ranked 50th, but after a few years passed, we found that it became 37th, according to the latest report issued in the current year 2022 AD, according to many of experts and specialists is expected to achieve great progress in the coming years.

The Turkish passport is distinguished by the fact that it consists of four types, each of which is intended for a specific category of people, as follows:
1- Ordinary passport:
It is given to all members of Turkish society.
It is obtained by foreigners with Turkish citizenship.
It bears the color red.
Its holder enjoys all the privileges that a Turkish citizen obtains.

2- Private passport:
It bears the color green.
It is given to Turkish state employees and important figures such as former ministers and others.

3- Stamped passport:
It is gray in colour.
It is obtained by Turkish state employees entrusted with missions outside Turkey.
It is given to the ambassador/consul and other persons holding high positions.

4- Diplomatic passport:
It bears the color black.
It is obtained by important figures in Turkey such as presidents, president's secretary, ministers and their families.
Finally, you must know that the Turkish passport, with its many advantages and its competition for the most important passports around the world, helps the investor to achieve abundant profit and successful and huge investment projects, and also he can link his business located in Turkey and other countries.

If you want to see the latest news related to the real estate market in Turkey, the issue of obtaining Turkish citizenship, the Turkish passport, or any other topic, you can contact our consultants to provide you with all the services you need, and do not forget to visit our website constantly and our social media platforms to find answers to your various questions .