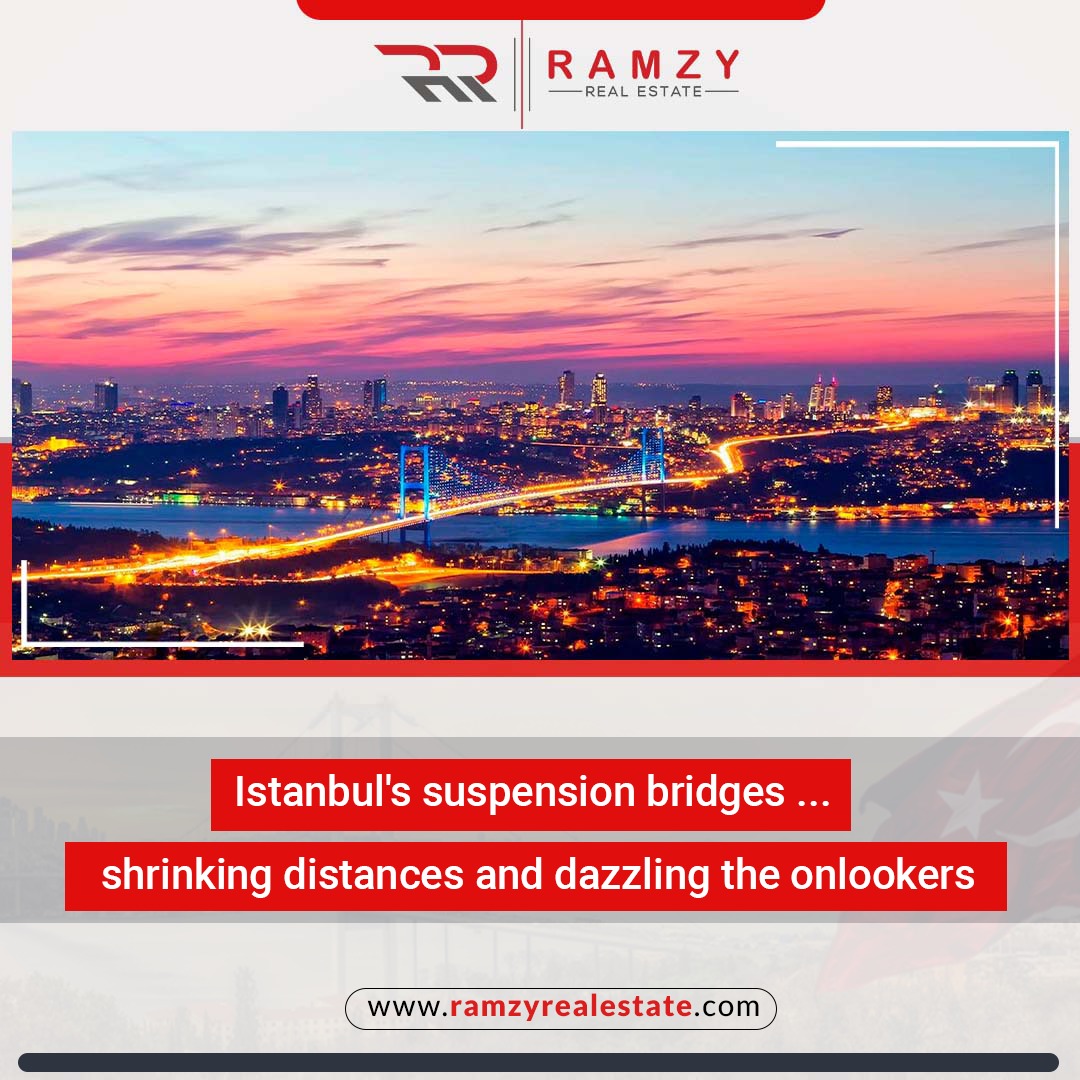 All you need to know about bridges in Istanbul:

Since the uprising that it went through in 2002 until the present day, Turkey is still continuing to advance and progress in all fields, refusing to slow down or stop launching the largest projects in the world that compete with major European countries, and perhaps a large part of those projects were related to suspension bridges, highways, etc. One of the railways that is now connecting Turkish cities to each other, and even Turkey to the world.

And because it is the largest Turkish city and the second largest city in the world in terms of population, it had the largest share, as the Turkish government built more than 50 highways within that city, making it ideally connected with its surroundings from the internal and external countries, not to mention its originally strategic location It is also the most prominent reason that drives the government to pay attention to it significantly and push thousands of investors to invest in real estate within it.

The most important bridges and highways in Istanbul:

Istanbul embraces the most important bridges in Turkey and the world and it has an important center in this field, especially since Istanbul alone includes 3 suspended bridges at the present time, while many other bridges are to be built over the Istanbul Water Canal, which is estimated to be 10.

It is that bridge that comes in the minds of everyone who hears the name of Istanbul and always appears in Turkish movies and series, leaving a wonderful impression of that city, summarizing its charm with its wonderful beauty.

The idea of ​​building the Bosphorus Bridge was to facilitate the crossing between the two parts of the city, especially since it is located on the borders of the Asian and European continents, and this prompted its inhabitants from time immemorial to think in a way that facilitates crossing and movement between the two halves and this situation continued until Sultan Abdul Hamid II came with ideas and designs in order to connect the two continents With an underwater sea passage, however, that remained captive to his ideas and he could not implement it.

The people of Istanbul did not wait for the Sultan’s dream to be fulfilled. Rather, they decided to build a suspension bridge between the two parts of the city in January 1970 AD. It was opened in 1972 in front of traffic, calling it the “Bosphorus Bridge” that reduced the distances and the time required to travel the distance from the European side to the Asian Tangible and clear.

- It is 1560 meters long and 33 meters wide, and thousands of cars pass over it daily. It is the fourth largest bridge in Europe and the seventh largest suspension bridge in the world.

- In 2007, a special lighting system was added to the bridge to give the city a wonderful view from sunset until sunrise.

- In the middle of the bridge are two towers, with a height of 156 m 2, and today it is one of the most prominent landmarks that symbolize Istanbul and it is what attracts tourists to Turkey the most.

With the massive increase in the population of the city, the Bosphorus Bridge became insufficient to block daily traffic, and for this Turkey decided to build a parallel bridge, which had the name “Sultan Mehmed Alfatih Bridge” in reference to the Ottoman Sultan Mehmed Alfatih who opened Istanbul in 1453 and ended the Byzantine Empire, as well as Some call it the "second Bosphorus Bridge".

The bridge was inaugurated in the year 1988 AD, and the length of the bridge reached 1090 m, height from the ground 105 meters and from the water 64 m, to be a total height of 169 meters. The design of the second bridge was not identical to the first Bosphorus bridge, but it was very similar to it, and the bridge had materials and materials that made it preserve It is ranked 14th among the best suspension bridges in the world, in terms of the mass of steel used in its construction.

The same company that built the Bosphorus Bridge built the Sultan Mehmed Al Fateh Bridge, adding the same taste touch in lighting the bridge, which reflects beautifully on the Bosphorus and allows the movement of commercial ships and cruise ships to pass smoothly and easily.

It has been said that the total cost of constructing the Sultan Mehmed Al Fatih Bridge has reached approximately 125 million US dollars. As for the two areas connecting them, they are the “Kvacık” area in the European section and the “Osto Siege” area of the Asian side.

The construction of a second bridge was a very positive thing in Istanbul, which prompted Turkish President Recep Tayyip Erdogan to open a third bridge in the city, which began construction in 2013 and ended in 2016, representing a modern icon of bridges in the world, as it is the most recent bridge in the city.

- Its length is 1408 meters and its width is 59 meters, and it is the widest suspension bridges in the world. It was called the “First Sultan Selim Bridge” or Sultan Yavuz Selim, at the last moments of the bridge’s construction when the last piece of metal that made up the bridge was installed.

- In the middle of it are two towers of the highest towers in the world, each of which is 322 meters long, and its total cost is approximately nine hundred million US dollars, according to the island's website.

- Built by the "Korean Hyundai SC" and designed by the French engineer, Michel Verlogo, and the Swiss engineer, Francois Klein.

- Architect Verlogo has described it as the greatest bridge in recent years.

The main objective of constructing the Yavuz Selim Bridge was to reduce the severe pressure on the two previous bridges, as the number of boats crossing them was estimated at approximately 180 million vehicles annually.

Impact of bridges and highways on Turkey:

Each of these bridges and main roads contributed to the social and economic development in Turkey in general and in Istanbul in particular through the establishment of secondary highways and secondary roads for those bridges and lines, thus contributing to enhancing the ease of access between the various Turkish cities and neighborhoods, alleviating the traffic congestion, reducing Distances shorten time.

Not to mention that Turkey linked it with many European and Arab countries, and there is no doubt that this was the most important factor strengthening Turkey's trade and economy, as these main roads link it between the Baltic Sea, the Adriatic Sea and the Aegean Sea, in addition to the eastern Mediterranean and the Black Sea.

All cars and trucks can pass through these lines and bridges, but vehicle owners who wish to cross them must have their vehicles subject to the express traffic system or the so-called "HGS", which is a payment system that works by radio frequency radio and its function is to deduct a certain amount each time the cars pass by. Through one of the bridges or highways restricted by the HGS system.

The HGS system is used throughout the Turkish Republic and is applied to all vessels passing through its gates and is considered a very useful system, especially as it provides a fast solution to traffic instead of waiting at the manual box office that was previously applied under the name OGS, which is the previous system of HGS. .

The traffic fare varies within those points from one place to another and according to the type of the passing car or truck, but it starts from 4.25 Turkish liras for regular cars and reaches up to 78 Turkish liras for some commercial trucks and trailers.

How is HGS paid?

You can obtain the HGS card or the express pass card through the nearest branch of the PTT or by showing the car papers and the necessary licenses to the banks contracting with the HGS department in Turkey.

How to fill in the HGS card?

The HGS card is a sticky card that is placed on the windshield of the car to be prominent every time the car passes through the wireless payment gateways, but the most important question is: How is the HGS card loaded with the balance?

Here we can answer the following:

The filling process was previously carried out by visiting the nearest PTT branch or through some of the banks contracting with the HGS department in Turkey, but the company recently developed a free application on Android smartphones and that is a shortcut to the place and time, and the best of that is that this application is able to warn Used when approaching the box office or if the balance is insufficient.

The impact of the suspension bridges on the surrounding real estate:

The three bridges contributed to the support of the real estate sector in Istanbul in general and the neighboring properties overlooking it in particular, adding to them enormous material and investment value, also in conjunction with the increasing demands of Arab investors and their constant search for apartments overlooking the Bosphorus Bridge or near it, and thus the neighboring areas have become Or near the three bridges, important areas and centers for the construction of mega projects and high-rise residential and commercial towers that express an explicit example of luxury apartments in Istanbul.

The two regions of Sariyer and the Maslak region are at the forefront of these areas, followed by the Tarabya and Besiktas regions in the European section of the city. As for the Asian side, the Kadikoy and sküdar regions come in the foreground, in addition to the famous “Umraniye” area.