Transportation of Istanbul…. The true meaning of accessibility 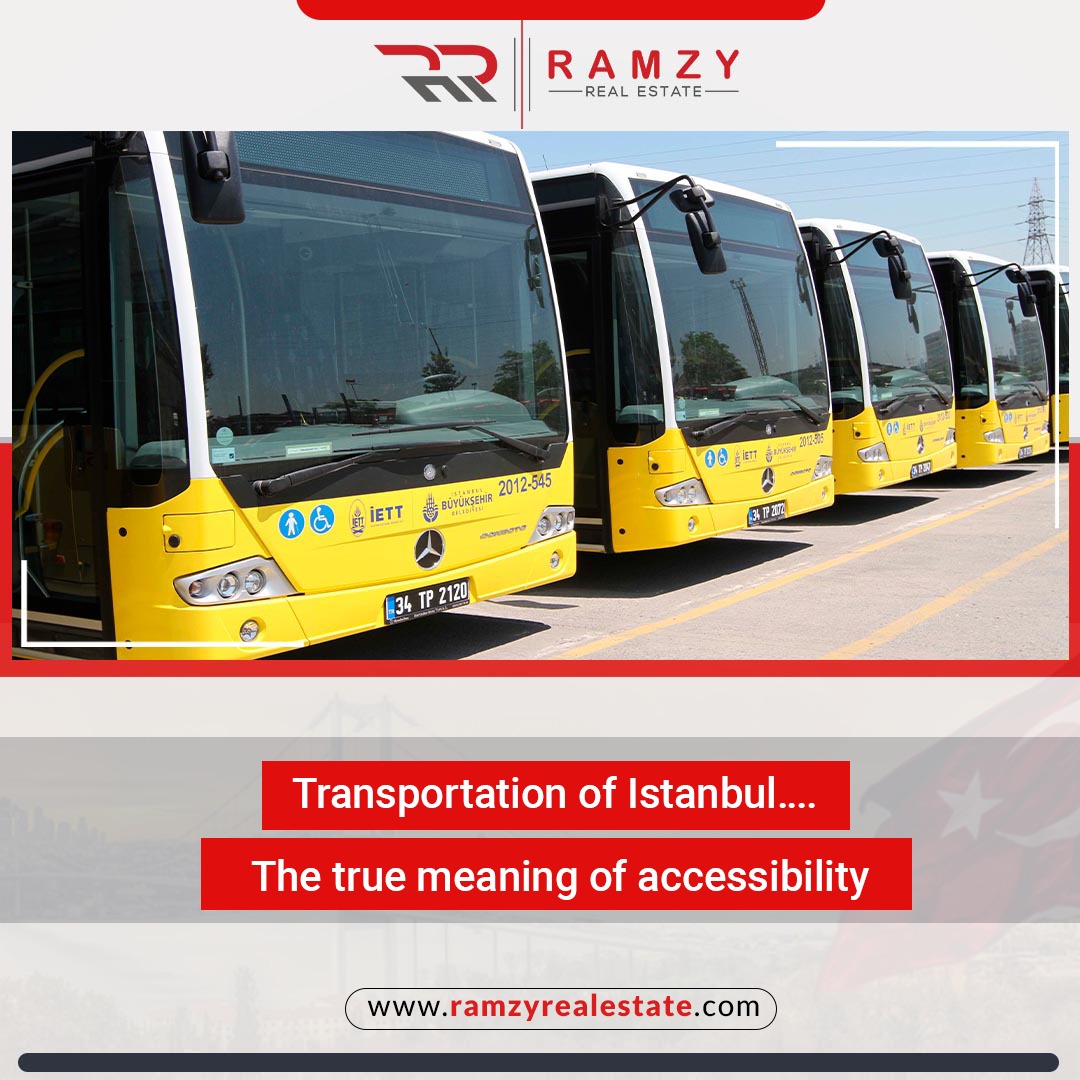 When talking about a huge city with a huge population such as Istanbul, there is no doubt that thinking about city transportation is important, especially if you want to settle in it, as transportation has become an integral part of our daily life today.

Ramzy Real Estate reviews Istanbul's transportation for you in a clear and detailed way from A to Z:

The metro stations in Istanbul form a powerful network of locomotives that serve the city population above and below the ground, and perhaps the three most important metro lines in Istanbul are:

- Line M1: This line, with its twenty-three stations, intends to link Yenikapi with the former Ataturk Airport.

- Line M3: As for this line, it connects the two Olympiad Koy stations and Kirazli station in Bagcilar district.

Also, the Greater Istanbul Municipality is striving to complete work on many new subway lines, and their number may reach 20 lines in various parts of the city, and it is expected that the length of the metro stations in Istanbul will exceed 1000 km by the year 2023.

With its length of 52 kilometers and a huge number of passengers reaching 800 thousand passengers per day, Metro Bus has reduced traffic congestion in Istanbul, and reduced harmful gas emissions, which made it an environmentally friendly means of transportation, facilitating safe and fast access to all areas of the city. Distinguished by a dedicated path that does not share with the regular car road, although it passes through the heart of one of the most important roads in Istanbul, which is the "E5" highway.

Perhaps the most important feature of Metro Bus is that it works 24 hours without stopping !! Connecting night with day and east with the west.

The metro bus line was established in several phases, the first of which began in 2006, when its first stations were launched from the Avcilar area, which extends to the Topkapi area and was inaugurated in 2007, then it was extended to the Zengirlikoy area in 2008 and finally from Zengirlikoy to Kadikoy area. In the Asian Department, 2009.

The Metro Bus is a hybrid means of transportation, as it is a mixture between the Istanbul Metro (METRO) and the regular buses (otobüs), hence the name metrobus.

The tramway in Istanbul operates through the electric railways in the present day, while it was previously just a railroad on which horses ran to pull trailers carrying residents within a limited range and it has been developed over time until it reached what it is today and it is one of the most important means of assistance in reaching the regions and neighborhoods Tourist and historical city of Istanbul

The most important tram lines in Istanbul:

- T4: Connects between Topkapi and Sultan Gazi through 21 stations

We can say that the public buses in Istanbul are the most used throughout the day, as these buses are spread in various regions and neighborhoods and have many routes and endless stations that were distributed in a logical and acceptable way.

The city of Istanbul is served daily by about six thousand public buses, as it is equipped with screens showing the names of the current station, the previous station and the next station, to make it easier for passengers in general and foreigners in particular to move without getting lost in the huge streets of Istanbul.

This vehicle has two names, the first of which is “the mini bus” in addition to the name “dolmash”, which is a Turkish word meaning full due to its small size and the number of its few chairs, but this small vehicle is considered one of the most important transportation of Istanbul today, as it enables you to move between the alleys and streets The sub-branch that is not connected by other transportation

It also has a super fast and smart design that keeps you away from traffic accidents, as the manufacturer of the dumplings is the global Mercedes company, which always offers the best in the field of vehicles.

The D76 bus is distinguished first by its distinctive shape as it is the only means of transport that comes with two floors and thus it accommodates a large number of passengers as it is very popular among the population in general and tourists in particular as its daily journey starts from the Bahcesehir area west of Istanbul, Europe and ends in Taksim Square. East of the city, for only 5 Turkish liras per person.

Through an application on your smartphone, you can call the taxi to be with you in just minutes !! There are also many taxi gathering points that are spread in Istanbul, specifically near malls and huge residential complexes.

You can download the application for Istanbul taxi through the following link: https://itaksi.com/#Hosgeldiniz

You can also handle it with ease while it supports both Turkish and English languages.

Given that Istanbul is located on the banks of Asia and Europe, it is naturally surrounded by many seas that make marine transportation an opportunity to reduce traffic congestion and a great experience to transport by ships and sea ferries

The Istanbul municipality launches hundreds of ships daily during regular trips and certain routes, some within the city and others outside it, as maritime transport in Istanbul forms a link with many neighboring cities, for example:

Domestic and foreign trips are booked through the Internet easily and smoothly. You can also pay directly at the ports before departure in case you do not have bank cards.

These ports are spread in many areas in Istanbul, such as:

Due to the importance of marine transportation in Istanbul, the fun it provides and the time it saves, many large residential projects in Istanbul provide a marine taxi service, for example our project 056 located in the Beylikduzu area directly on the Marmara Sea, which includes its own port, provides a marine taxi service, which It will make the traffic congestion for its residents a memory of the past.

Transportation of Istanbul depends on a modern payment method that suits these modern means and transportation through a multi-use card called Istanbul Kart - Istanbul, which offers many prices according to the identity of the holder, for example:

- The discount student card: for university and school students, and each class has a specific discount

And other types that are commensurate with the values ​​and needs of society.

Transportation of Istanbul…. The true meaning of accessibility