Reasons for the jump of the Turkish passport's ranking 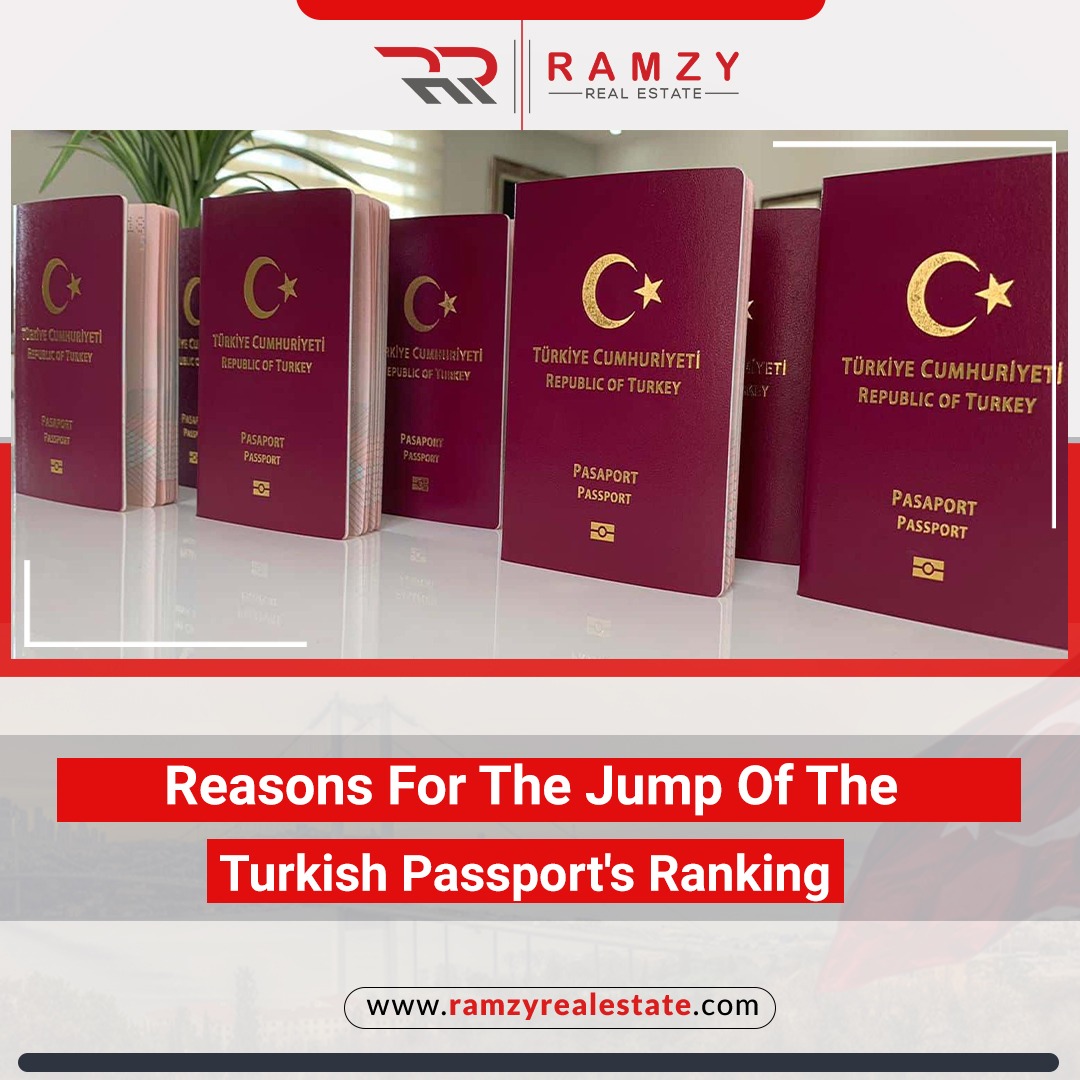 The passport ranking is one of the indicators that measure the strength of countries, because it is a guide to the country’s progress at the international level and its strength among all countries of the world, it reflects the state's stability at all political, economic and social levels, and all countries of the world work to make the arrangement of their passports in an advanced arrangement from time to time.

This requires intensive and sustainable work to strengthen the economy, which is reflected through several indicators, including the annual growth rate, gross domestic product, the volume of foreign direct investments, the annual volume of tourism, whether international or domestic, as well as the welfare of the country's citizens.

And also, the political stability that each country enjoys, which is reflected through security stability, crime rates compared to the population censuses, social stability and other international indicators determined by the international community, and this comes with hard work over years through many internal political and economic reforms and work on continuous improvement to achieve that progress.

Turkey and twenty years of development:

In the past twenty years, Turkey was able to raise the ranking of its passport through intensive and hard work in all sectors, starting with the infrastructure projects such as the road sector through renewing and modernizing it, such as strengthening the highway network, whether those roads linking cities with each other or those within the same city, It also worked to modernize, strengthen and develop the transportation network, especially the subway network, and to establish multiple lines to connect the same city districts to each other, such as Istanbul.

The state has also been keen to keep pace with technological development through its keenness to providing the artificial intelligence into all services provided by the state to citizens and foreign residents, as most of the citizen’s transactions take place through phone applications in everything starting from connecting it to the transportation network throughout paying bills, online purchasing, applying to universities and other services that have been designed to help save the time of the Turkish citizen.

At the same time, it was accompanied by working to improve the tourism sector, one of the most important sources of foreign currency in Turkey, and to raise the efficiency of tourism services provided to tourists at low prices compared to the prices of other European countries such as France, Spain and the United Kingdom, and interest in tourism as one of the main sources of direct foreign currency, so that Turkey now occupies the sixth place in the world in the global tourism movement.

The Turkish government has also deepened the role of industry and trade in improving its economic statement and raising the level of trade exchange between it and other countries, as well as overcoming the obstacles to foreign investment that facing foreign investors, by makings many reforms at foreign investment laws and reducing taxes and fees for establishing foreign projects inside Turkey, it also activating its exports and promoting a number of its industries, including clothing, wood, furniture and plastics, food industries.

It has also developed the real estate construction sector and established a number of giant projects in the field of construction. All these factors made the Turkish passport ranking in leaps and bounds every year from the previous year, to become Turkey in the past ten years a center for attracting foreign investments in all fields, commercial and industrial and even in the field of construction, and also in return Turkey becomes one of the most important emerging markets in the region, as it has been ranked in the seventh place in the world as one of the strongest emerging markets.

Advantages of the Turkish passport:

The Turkish passport is ranked 37th among the countries, according to the "Passport Index" ranking, Turkey passport has many advantages including the possibility to travel to 111 travel destinations around the world without visa or obtain a visa on arrival to many countries such as Brazil, Qatar, Albania and South Korea, Turkish passport allows to its holders’ immediate travel to many countries around the world, however, Turkey passport holders will need to obtain a prior visa to enter about 118 countries including China, all EU countries and India.

The Turkish passport is also ranked at 37th according to the Passport Index, Turkish citizens are qualifying for the investor visa program (E-2) in United States, also can get free school and university education, the citizenship lasts for life time and can be passed on to newborns, free medical care services for all citizens, the possibility of obtaining citizenship Turkish without having to physically live in Turkey.

Advantages of the Turkish passport:

• you are free to travel to more than 111 countries

• Eligibility to the Investor Visa (E-2) program in the United States of America.

• granting free education to your children in school and university.

• granting Turkish citizenship to the newborns

• Free medical care for all citizens.

• The possibility of obtaining Turkish citizenship without the need to actually live in Turkey.

• you have the right to vote in all types of elections.

• you are allowed to have another citizenship.

• Turkish passport is valid for 10 years and you can renew it for lifetime.

• Flexibility of dual citizenship, in case that you live in a country that does not allow to have another nationality such as Germany, Turkey has a turquoise card program that gives you full Turkish citizen rights except voting in elections in Turkey.

1- The Red passport: It is called “General Turkish passport”, it is a red public passport that most of Turkish citizens are holding, and it is the same passport that foreigners obtain when applying for citizenship.

2- The Green Passport: Or the Special passport it is granted to the officials’ employees whose working in government institutions such as retired parliamentarians, ministers from outside parliament, employees and retirees of the Banking Supervision and Regulation Institution. It is also granted to their families for a period of 5 years after fulfilling certain conditions.

3- The Gray passport: it is known by the passport of service and issued to people working abroad for the country, and its duration is limited to the duration of the assignment.

4- The Black passport: it is the diplomatic passport and has been granted to government officials in Turkey, and it has special privileges, as its holders can enter many countries without a visa.

But according to Turkish official reports, from the second half of 2018 until now, there are about 20.000 foreigners who obtained Turkish citizenship, according to data issued by the Directorate of Land Registry, through real estate investment.

Iranian investors come in the first place among the other nationalities obtaining Turkish citizenship through real estate investment, and the Afghans comes in the second place, and Iraqis at third place, Yemenis at fourth, Chinese fifth, Palestinians sixth, Jordanians seventh, Lebanese eighth, Egyptians ninth, and Pakistanis tenth, according to the report issued by the Directorate of Land Registry, through purchasing real estate the easiest way to obtain Turkish citizenship and having Turkish passport.

• The required amount to obtain Turkish citizenship in real estate investment is 50% less than other ways.

• Having a profitable investment income by renting the property or you can live in.

• Real estate investment is a safe investment away from the risks of profit and loss, and Turkish citizenship procedures can be started immediately after getting the Tapu (title deed), and you will obtain your Turkish ID within 45 days and up to a maximum of 90 days.

• The investor can sell the property after three years, as real estate prices in Turkey are rising annually, this why Turkey are considered one of the most countries in the world with a high investment value of real estate.

At Ramzy Real Estate Company, we are glad to accompany you on the journey of buying property in Turkey and to provide you with a range of services to make the process smooth and easy , as we are always keen to present a variety of options for residential and investment properties in addition to helping you obtain Turkish citizenship for those looking for it.

- For more details, you can contact us via the communication platforms or via the WhatsApp attached on the site.

Villas for sale in Istanbul European side

Reasons for the jump of the Turkish passport's ranking Luxury apartments with charming views of the Marmara Sea Apartments for Sale in Istanbul Buyukçekmece Villas for sale in Istanbul Beylikduzu Luxury Apartments by the Sea of Istanbul Apartments for sale in Fatih Istanbul within a luxury residential complex Apartments for sale in Eyup Istanbul within a luxury residential complex Apartments for Sale in Turkey by the Sea, Within a Residential Complex in Istanbul Apartments for Sale in Asian Istanbul with a Sea View Villas for Sale in Turkey Istanbul with a Charming View